I have been neglecting my blog. It is a bit like neglecting to clean the fridge. You know the longer you leave it the more hassle it will be, but then again it’s not a matter of utmost priority; the worst that will happen is a lettuce will turn into sludge or a pot of home-made jam will cultivate its own brain cells. In a blog’s case, the worst that will happen is your reader statistics will shrivel up into single figures. At the moment I’m not really bothered about that, but I promised a friend to write something this week, and to prove I can keep a promise, I am writing this.

My friend is French. He speaks pretty damn good English. But like a lot of my French friends, my blog is one of the only sources of English language he reads on a regular basis (poor him… poor them), so it it my duty to the people of France to keep writing, no matter what, in order to keep their English fit and healthy (if a little tainted with words made up by me which should exist anyway and which make perfect sense in the given context).

I have either been too busy to write – an unfamiliar situation in my current life despite racing about after the kids as I usually have nap-times and evenings to write, or I have been too happy – no-one wants to read about how great someone else’s life is, or I have been too sad – no-one wants to read about someone in tears over a pet who has disappeared. I did a week of dancing at Valence with a brilliant choreographer (I must write about that soon), followed by a week in the UK, followed by our return to France and the discovery that our trusty 15-year old Queen of Labradors had gone missing. She is, indeed, still missing. I think that means she is in Labrador Paradise by now, frolicking with other dogs of sexually diverse orientation; Baloo fancied males and females alike and didn’t care who knew. Neither did I, although my then-boyfriend was always very embarrassed to see her mounting other bitches, yo.

Anyway, Baloo turned 15 on October the 16th this year and I have just seen that my last post (an absurd one which does not merit being read) was indeed written on the morning of her birthday. Wicked mistress, I didn’t write anything about Baloo this year, partly so as not to bore readers, having written about her last year here. I sincerely thought she wouldn’t make it to her 15th birthday, but she did, if a little creakily. We celebrated it with some leftover cherry tart and candles and a dog bowl with stars and the word “DOG” written in it. 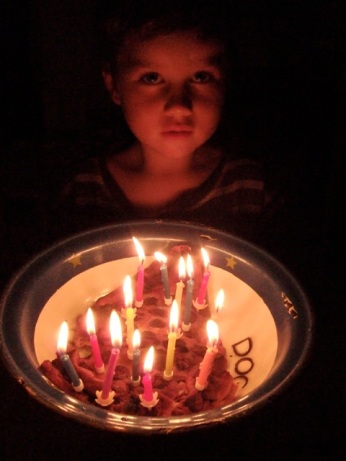 She seemed a little perturbed by the whole thing. But then, I suppose that when you get to 90-odd years (I think that’s the equivalent of a 15 yr old labrador), you’re not really into sweet desserts and loud singing, although she was deaf so she probably just wondered why we kept opening our mouths so wide and holding them there, while advancing with a bowl full of flames.

Tommy, our lighting engineer dealt with the pyrotechnics.

So Baloo made it to the grand old age of fifteen dog years. Which is like us hitting 90, 95 or so. That’s pretty damn good going. She had a painful hip and had started taking anti-inflammatory drugs every morning, but that was all she had wrong with her. When I dropped her off at my friend’s house, she was slow and creaky, but fine. Or so I thought.

Apparently one evening she just got up and wandered off.

She has never gone further than a few metres from the person looking after her. But this time she went far, far away. And no-one has seen her since. I was in England when I heard she had been missing for two days so I phoned round neighbours and the local authorities but no-one had seen her. When I got home I went looking for her in the countryside and woodland around our friend’s house, where she had been staying. But it really was like looking for a needle in a haystack. After a while I wondered if I even wanted to find her. What would I find anyway? Grisly remains? Did I really want to see her like that? I imagined what it must be like when it’s not an old dog you’re searching for, but a lost child. I suddenly felt very cold. I thought how lucky I was to have my kids safe at home in the warm. In the end I turned back to my car and drove home.

We are still getting used to Baloo not being around. Every time we arrive home Léonie calls her. Every time we drive past our friend’s house Tommy goes very quiet and sometimes cries a bit. I had a good old bawl the day I spent the morning searching for her in the woods. But in the end it’s typical of Baloo to spare us of the trouble of dealing with her death and the pain of seeing her dead. She was such a gentle, easy, loving dog.

R.I.P. Baloo. We loved you so very much.

NB: For those of you who can’t stand people going on about their pets, Normal Service will be resumed post hastily.

A few weeks ago, when we were planning Tommy’s birthday party, I opened my big mouth and stupidly asked him what sort of birthday cake he would like.

My mind went utterly blank as brain cells and synapses struggled to imagine how on earth to bake and make such a cake, resulting in an electrical spark going awol and burning a fuse in my head. Some smoke came out of my ears. I am not a great cake baker. I am quite good at drawing, so I can draw a pirate ship, but I had no idea how to conceptualise the drawing as a three-dimensional chocolate sponge thing.

So off I went to visit Granny Google and lo, she had ideas a-plenty as to how to make a pirate cake. I printed out what seemed to be the easiest yet still looked pretty impressive as edible pirate ships go, and of course, left it until the morning of the party to actually start making the thing. Which created a problem: how to make the boat-cake without Tommy seeing? It wouldn’t be a surprise. And there lies the beauty of this whole baking project… it doesn’t need to be a surprise. In fact, it’s far better for it NOT to be a surprise, as then your little boy can thoroughly enjoy seeing it made and spend time gazing at it, rather than glimpsing it for 20 seconds while everyone yells Happy Birthday TO YOU, blowing out the candles and watching it being hacked into pieces and eaten before having really taken it in. Another advantage of getting your little boy roped into the creation of the cake is that little boys are top whizz experts in pirate boats and therefore can advise you regarding essential features, where they should be, what colour and how many. Tommy directed me with great authority on the number of masts, sails, oars and cannons, and patiently explained that there needed to be a treasure chest overflowing with gold and jewels, at least 3 pirates, one of whom whould be climbing into the boat having just fought off a shark, plus a shark in the sea by the boat, a desert island nearby, some rope and various cutlasses and knives.

Together we baked two round chocolate sponge cakes and once they had cooled off a bit I cut them in half and sandwiched them together with some chocolate icing to make the hull of the boat. I poked two straws through them to hold them together, wrapped the whole lot in foil and put it in the freezer for half an hour to make it more solid. 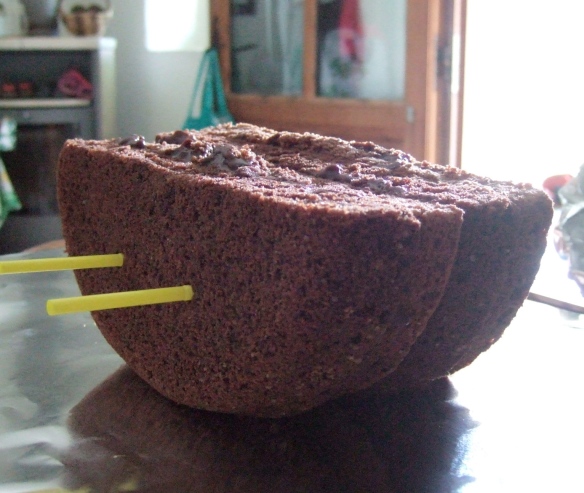 When I took it out of the freezer I cut the curved bottom off to make the boat sit properly on my “ocean” (more foil) and Tommy and I smothered the boat in chocolate icing. We then made barriers with pretzels and a flake, coils of rope with liquorice spirals, a mini Mars bar became a treasure chest and little red and yellow jelly sweeties cut into bits became the overflowing pirate booty. 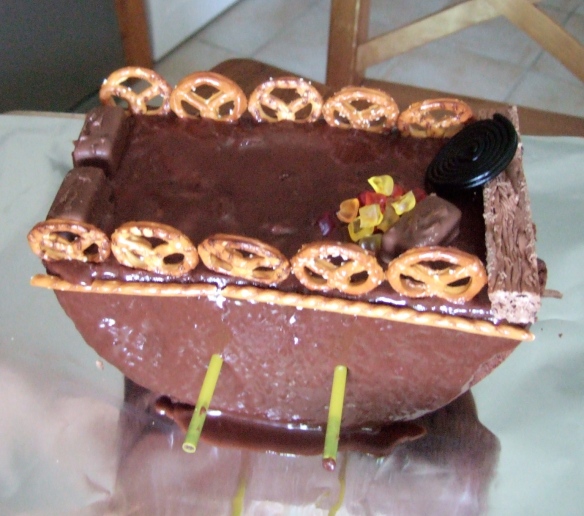 We put the boat back into the fridge and cut out sails from gold and orange chinese paper which we threaded onto three mikado sticks. I found a little Union Jack ‘flag’ from a Jubilee skirt my sister had sent Léonie and we prepared three Playmobil soldiers for their birthday mission. The kids arrived (all 12 of them. I know, I know… we clearly didn’t learn our lesson from last year’s party) and we soon threw them all into the pool, which is tiny and meant the kids were so squished in that no-one had enough space to drown. Good safety technique. After the ice-cream boutique episode (me cramped into the little kiddy playhouse in the garden somehow serving ice-creams through the window), Tommy and I slipped away to finish the cake. We hoisted the sails and the flag, lit the cannons (candles), taught the pirates a last sea shanty before they left for sea… and we set sail. HA HAAAAAARRRRGGGHHH ME HEARTIES!

The kids were gobsmacked. I loved their faces. We sang happy birthday and joyeux anniversaire over and over again, relighting the cannons each time. And then came the moment to cut the cake. “Non!” shouted one of the boys. And another one asked “can we eat it without cutting it?” Which of course posed a slight problem. So I suggested we cut into the ship as if it was being attacked by a giant sea monster (me), then we could all eat some of it, and the rest we could leave as a shipwreck. “Yay! Oui!” So I donned an evil sea creature persona and hacked into the gateau-bateau with a huge fang, serving portions of boat to 13 wide-eyed mini-pirates. At the end there was just a chunk of boat left, keel reeling, sails toppling. One kid even ate the rocky island and tried eating the candle in the shape of a 5. And they adored munching on the salty pretzel-barriers along with the sweet chocolate cake.

So to any parents wondering what kind of cake creation they dare to tackle for a looming birthday party, I thoroughly recommend this one. It was easy peasy and so much fun to decorate. If I can do it, anyone can.

Close-up of treasure chest with gold and jewels. Ho ho ho and a bottle of gummy bears.